As an organization, Mental Health America of the Heartland (MHAH) has been around for nearly a century. We began our work in 1909 when Clifford W. Beers, a young businessman who struggled with a mental illness, shared his story with the world in his autobiography “A Mind That Found Itself” and created a national citizens’ group to promote mental health and improve conditions for children and adults living with these health problems. It was a revolutionary act and attracted prominent national leaders of the time, including the philosopher William James and the Rockefeller family.

Our name, Mental Health America of the Heartland, was chosen to communicate how fundamental mental health is to the overall health and well-being of every American. Our logo is meant to convey MHAH’s forward-looking, vibrant movement; the bell image in the logo is a graphic representation of an actual 300lb. bell, the Mental Health America Bell. The Bell was forged more than 50 years ago with iron chains and shackles that bound people in mental asylums. It serves as a vital reminder of our past and the progress we have made, and a powerful symbol of our vital mission.

Mental Health America of the Heartland (previously The Mental Health Association of the Heartland) resulted from the consolidation in 1996 of three affiliates of the National Mental Health Association that served Johnson and Wyandotte (KS) and Jackson (MO) counties. Motivations for consolidating these small agencies, some with over 75 years of service to our community, were many: to enhance program opportunities, to provide continuity for individuals and families with mental health needs, to respond to the funding community, and to realize economies of scale. With consolidation, the agency engaged in a thoughtful process of re-organizing its programs that included closure, merger, and attention to new community needs, all awith an eye toward ensuring programs remained mission-driven and available to citizens throughout the Greater Kansas City Metropolitan Area.

Story of the Bell

During World War II, future leaders of the National Mental Health Association worked in state mental hospitals. There, they witnessed the deplorable and inhumane treatment of patients with mental illnesses who were chained by their wrists and ankles to the hospital walls. This experience inspired the men to devote their time to improving the lives of all those who suffer from mental illnesses, and changing the way America thinks about persons with mental illnesses. They believed with better understanding and treatments, the cruel practice of using shackles and chains to restrain people with mental illness would eventually stop.

In 1950, the National Mental Health Association chose a bell as their symbol. Two years later, Mental Health America issued a call to asylums across the country for their discarded chains and shackles. Volunteers at the Mental Health Association’s National Headquarters in New York collected the metal restraints from hundreds of mental hospitals across the country and piled them in the building’s lobby. These restraints were then shipped to the McShane Bell Foundry in Baltimore, Maryland, where on April 13, 1956 they were dropped into a crucible and cast into a 300-pound bell. Nothing could proclaim hope for those who have mental illness more dramatically than a bell cast from the actual chains and shackles used as restraints for persons with mental illnesses.

Too many, a bell symbolized freedom and liberty for the 40 million Americans affected by mental illnesses. The bell serves as a powerful reminder that the invisible chains of misunderstanding and discrimination continue to bind people with mental illnesses.

Over the years, national mental health leaders and other prominent individuals have rung the Bell to mark the continued progress in the fight for victory over mental illnesses.

Today the Mental Health Bell stands as a national symbol for the mental health movement. 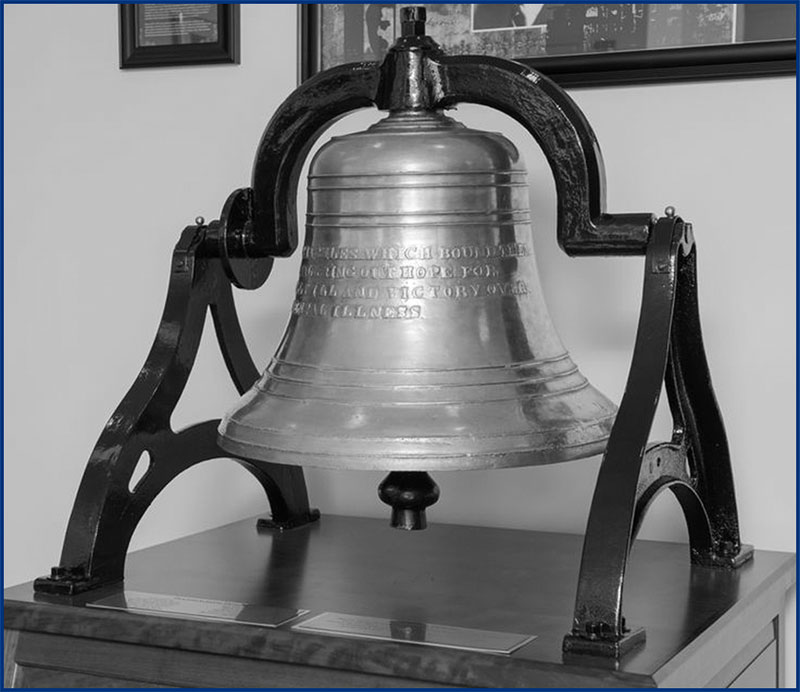